The history of ATR

ATR was founded as company in the fields of development and production of automation plants in Viersen, Germany in 1970.

Very soon it became clear, that the market was lacking the measurement and control components ATR required for its sophisticated drive- and automation solutions.

For this reason, the company Industrie-Elektronik was founded in 1980.

It incorporated with ATR Antriebs- und Regeltechnik in 1987 and became the company ATR Industrie-Elektronik GmbH.

Later, the specialist firm for drive and automation TM K.G. Dr.-Ing. habil. Langweiler GmbH & Co. KG was taken over and incorporated into the company.

Since 1988, ATR has been a company of the internationally operating Siempelkamp-Group and has become a renowned specialist for the manufacturing of switchgears as well as in the fields of development and production of measurement- and control electronics.

In January 2007, the company relocated its site from Viersen to Krefeld, where a new production hall had been built. 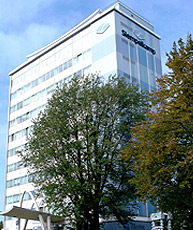